Well, I haven’t had much time to scrap as we are downsizing so have been packing up the household!  Oh WOW, I was a bit embarrassed to see just how many boxes were marked ‘Craft’, but I know you will all understand, glad I have an understanding Hubby too.  The good thing with AZZA Scrapping is that you really don’t need too many boxes out to keep scrapping the AZZA way.   I have even managed to hold classes with what I have kept out and it all fits in the car quite easily.  That is why I love scrapping the AZZA way!

This month it’s been “Raining Cats and Dogs” I see.  I know a lot of Ladies love to scrap their pets and were wondering where the AZZA Cats and Dogs theme was – well, it has arrived.  The Weather theme is also out this month which is a great theme as it can go on so many pages.

Our basket for the month:

All the products can be purchased separately:

If you do struggle to decorate your pages, the new books AZZA are now releasing with the themed products are a great little buy.  The book contains 52 pages with
16 exclusive page layouts showing step-by-step instructions using various stencils and the ‘Weather’ Decorating products.

Here are a few examples of what the Ladies have created using the new products:

The first page is by Audrey Vast using the AZZA Eclipse stencil and the AZZA Cats stamps.

Deb Byrne created the next page using the Eclipse stencil and the AZZA Dogs stamps and Decoration stencil.  Note how once you have stamped your image you need to bring it to life with your pens, chalks or inks and do remember to always give your image a ‘base’ to stand or sit upon.  This again can be done with your chalk, ink or pens.

The following page was created by Jennie, our Consultant in Townsville.  She has used the AZZA Savannah stencil and the AZZA Weather products.

Jennie has used chalks  and chalking pencils for her border, what a beautiful combination.

The page below was created by Deb, using the AZZA Mauritius stencil and the new AZZA Weather products.  Note her use of the punched out circles, so often we think we have to use them whole, we don’t think of cutting them. 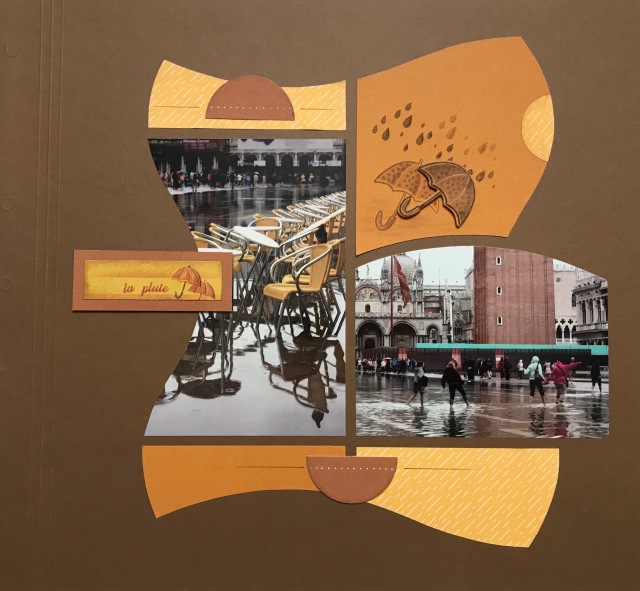 Now for a few pages I found created with the AZZA Fairy stencil.  With double pages being released in July, I thought these layouts would give you some inspiration to get out a double page and begin to create!!  The first layout was created by Yvette in Europe.  A link to her page:  les scraps d’Yvette

Below is the front of the set of pages. 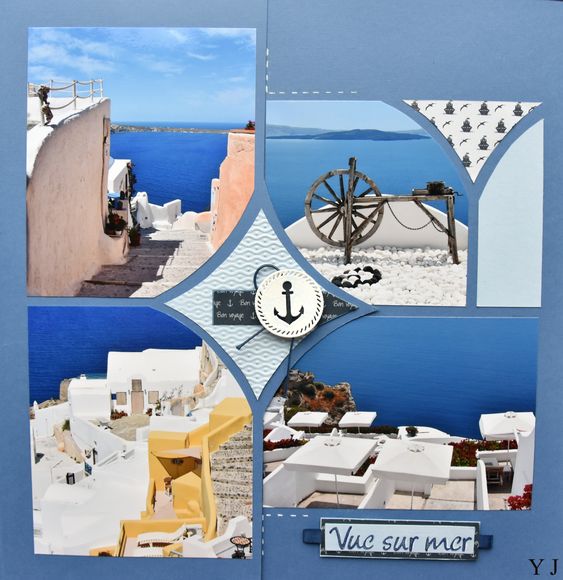 Another page created with the second stencil from the AZZA Fairy Duo, by AZZA Europe, sadly I could not find the name of the person that created the page itself.

I love the use of the AZZA Cork and Die cut used behind the frame. 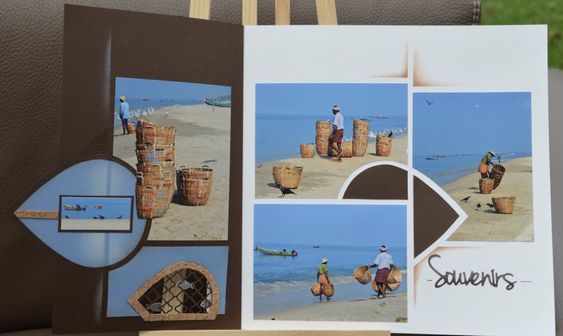 And lastly a fun snow page by Chantalouscrap with a flap and using all our Winter themed products.  With Australia mid-ski season many of you should have some ‘Snow’ photos ready to GO!! 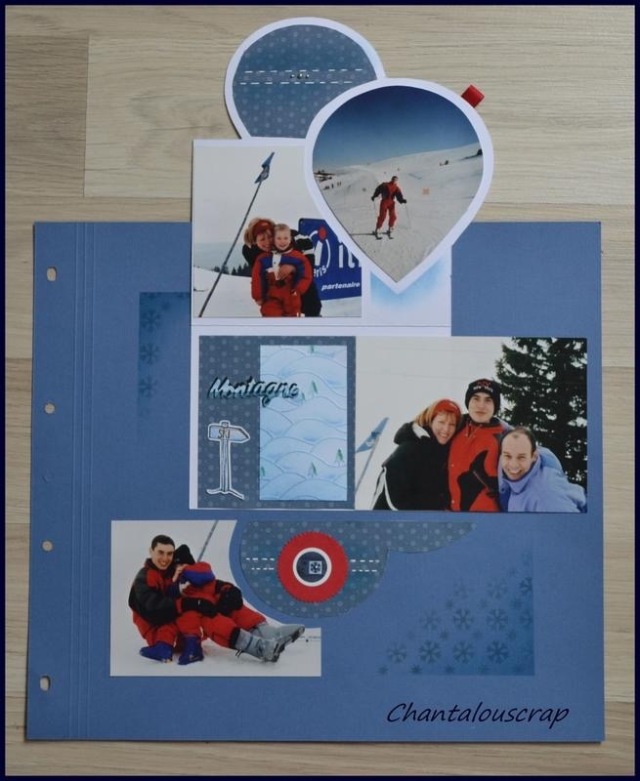 Now for a little decoration:

We were all waiting with bated breath for the arrival of the Wrought Iron Cutting Die so I thought I would show you how to have some fun with it.

A beautiful card made by AZZA Europe.  The cutting die was used together with the AZZA Big shot starter kit. 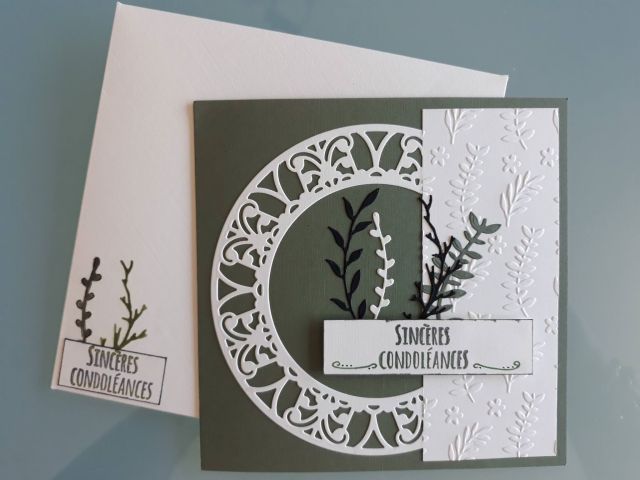 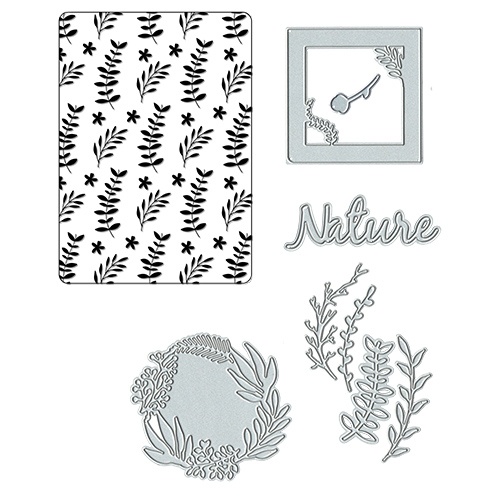 The Cutting die is perfect for cards: 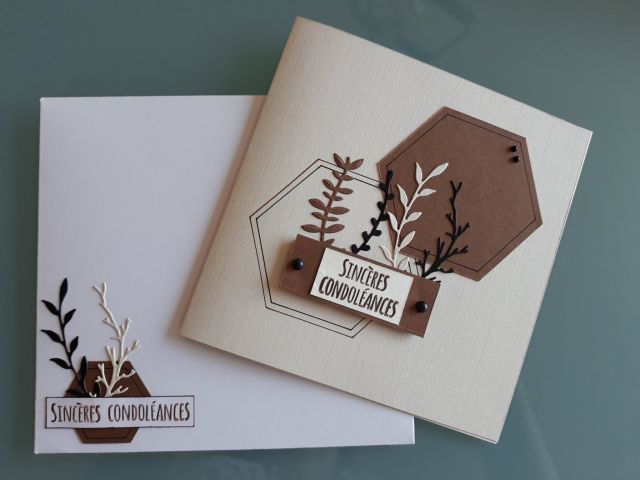 How beautiful is this little creation below.  I love the shading on the card and the little bit of AZZA Cord holding up the birdcage.  What a lovely gift tag or card.

Then for something a little different: 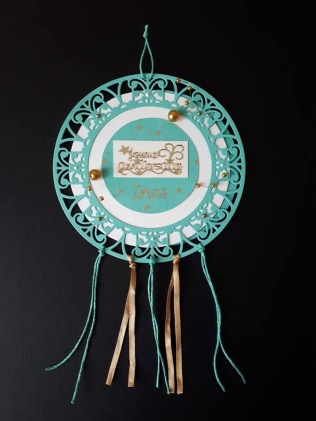 Below is the same idea, just different colours.  I did think of those Mums out there having to create Rosettes for competitions, this would be the prefect product for you.

AZZA Festive pearls, Cord and ribbon have been used together with the Cutting Die and papers. 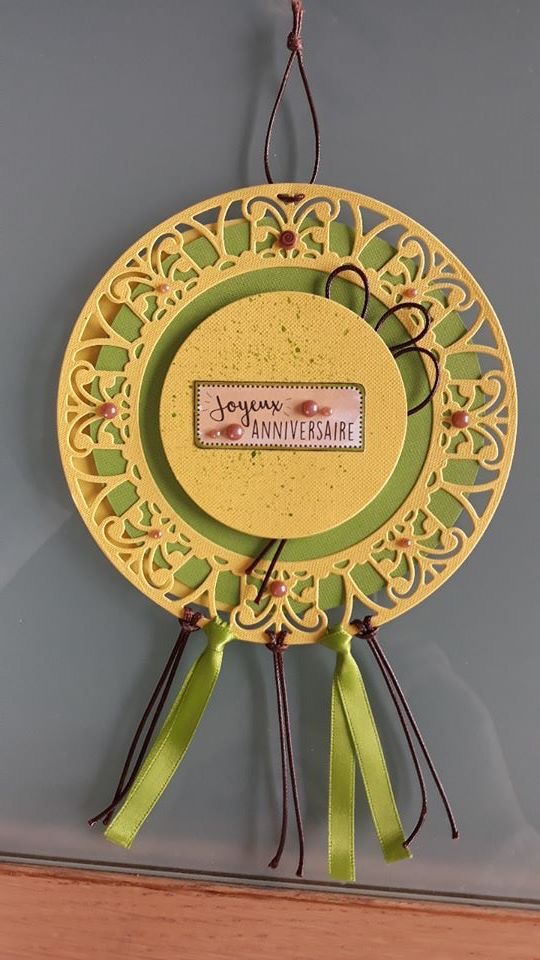 While we are looking at cards, the August release of the AZZA Summer and Field flowers are beautiful. These little stamps are only $13.50 and are so versatile. 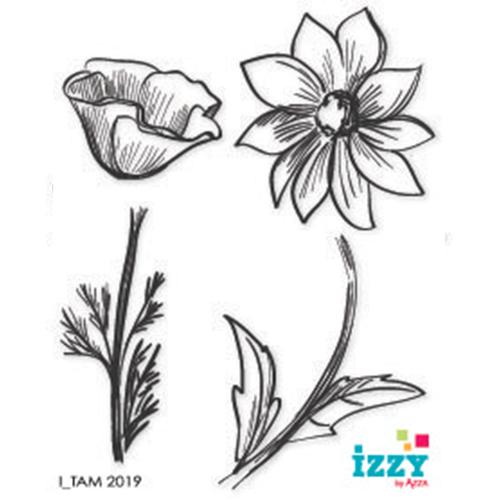 Here are some lovely cards that I found on the internet created by the very talented Ladies in Europe.

This card was created by Christine Caparros, her use of the Alcohol pens is amazing.  You can see why the bud and the stem have been kept separate on the stamp itself. 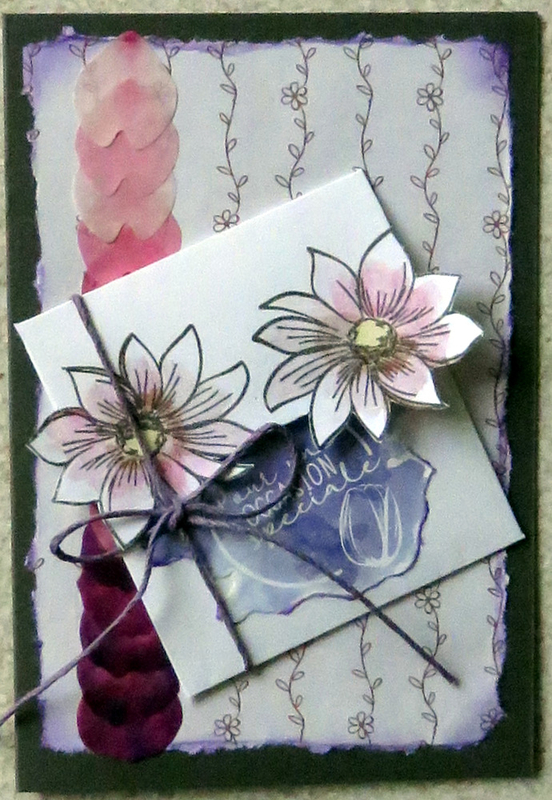 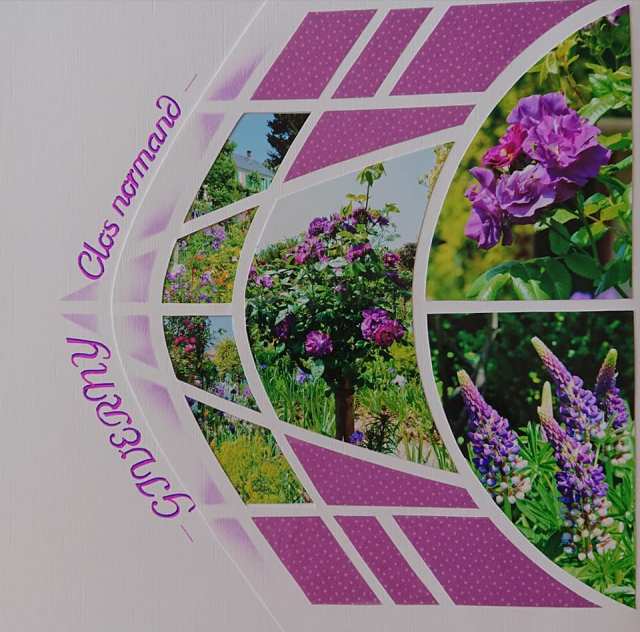 This is the front page of a double-page layout using the Savannah Stencil.  Note how the front page has been cut so the Title can be seen when the page is closed.

Below another page created by Jennie, our Consultant in Townsville.  The front page folds out to complete the double inner page.  Jennie will have an AZZA Stand at the Craft Alive in Cairns this weekend, so if you are in the area, do pop in and see her. 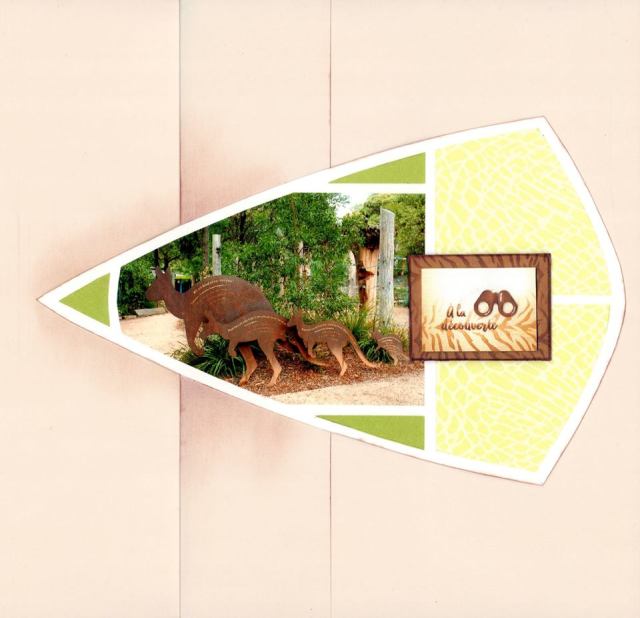 Below is the page opened out.  The page highlights the stencil, deco stencil, printed pager and printed decorative page.

I loved this layout by Mariescrapagogo and her use of colours.  Note how she has brought both colours into her decorations, in the 3D products and the chalking. 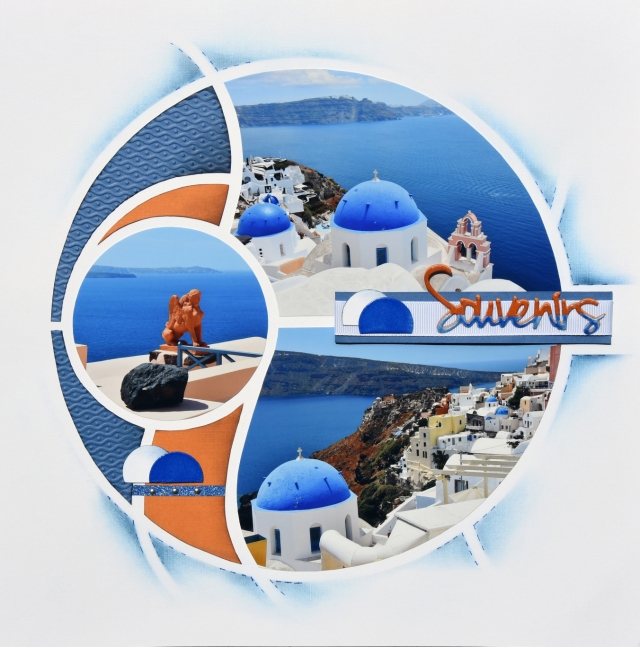 I like to finish with a page that shows that you can keep your photos complete, this page was created using the Fairy Stencil.  I keep reminding my Ladies that you do not have to use the whole stencil, you can keep you page as simple or make is as complex as you wish.

Just a reminder about the AZZA Football competition that runs to the end of the month.  Your chance to win a stencil that will not be released, it remains a special ‘World Cup’ Edition. 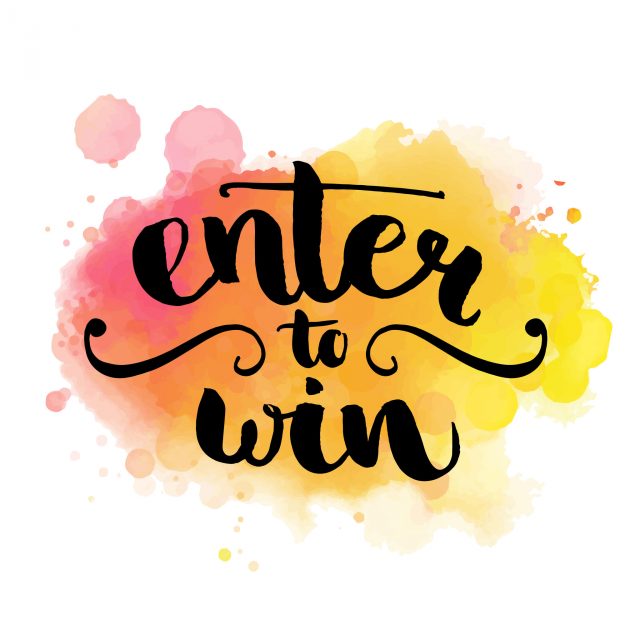 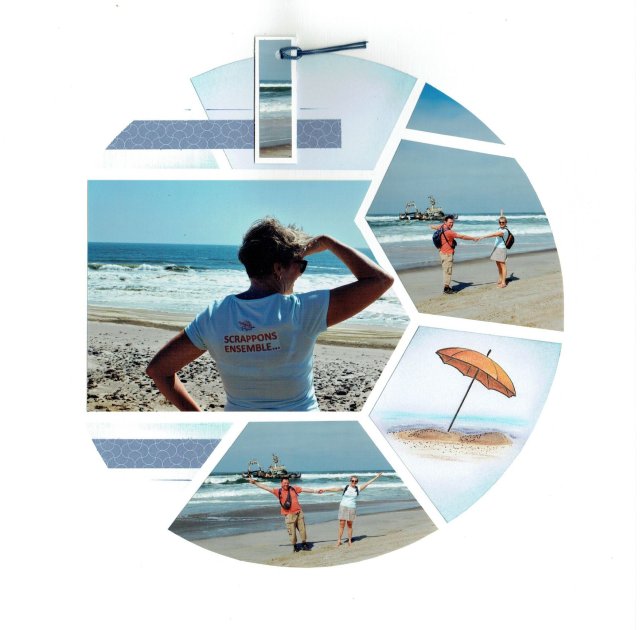 Here is a layout created with the ‘Football’ stencil YOU could win.

Send your layouts (using any Azza stencil and using only Azza decorative products) to:               deborah.azza@gmail.com by  31 August.

2 Responses to Raining Cats and dogs